Def Leppard to bring The Stadium Tour to Europe

Noel Gallagher doesn't go to Glastonbury for the music

Tony Hadley got 'sound advice' from the late Freddie Mercury

Billie Eilish has announced the dates for her upcoming Australian tour.

The Seven-time Grammy Award winning-singer is heading Down Under in September next year with concerts in Sydney, Brisbane, Melbourne and Perth.

It’ll be the pop superstar’s first trip to Australia since 2019, when she performed to screaming fans at sold out shows across the country.

‘It’s just gonna be crazy. It’s gonna be jumping and screaming and getting low… It’s gonna be so much fun. I cannot wait.’ the 19-year-old singer said of the shows. 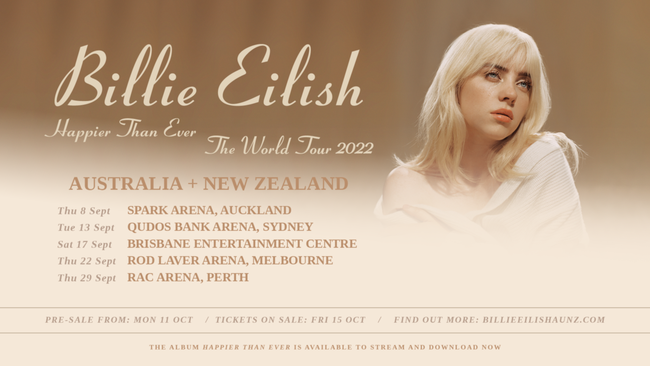 The tour is in support of Billie’s smash-hit second album Happier Than Ever, which has topped charts around the globe.

Sam Fender to rock arenas in 2022 on biggest headline tour

Tom Parker's widow plans to get jewellery made from his ashes

Tom Parker’s widow plans to get his ashes made into jewellery. The Wanted singer passed away in March aged just...

Kim Kardashian has revealed her nine-step beauty routine to keep her skin looking good. The reality TV star has launched...

Def Leppard to bring The Stadium Tour to Europe

Joe Elliott has revealed Def Leppard’s stadium tour will travel across the pond to Europe next year. The ‘Pour Some...

Matthew McConaughey has applauded US President Joe Biden’s new gun control bill as a “step in the right direction” just...

Jerry O’Connell has bought a special gift for his wife Rebecca Romijn to celebrate their 15th wedding anniversary. The couple...

Jack Harlow brought out Brandy and Lil Wayne at the 2022 BET Awards. The ‘First Class’ hitmaker had a couple...